The Dallas Cowboys had always been coached by one man: Tom Landry. Landry is a legend in football, thanks to pioneering the “4-3” defense, which is still used today. He ascended to coach the Cowboys in 1960, a job he would hold for 29 seasons. Though he got off to a rough start, he needed time to refine his defense. 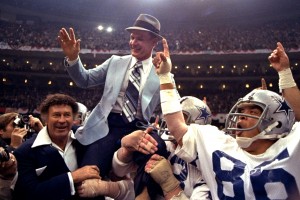 The NFL’s most formidable squad at the time was the Green Bay Packers, coached by another legend named Vince Lombardi. Lombardi’s offense was fluid; his players found pockets and went to them. They were not married to pre-defined routes.

Eventually, Landry’s fluid defense paid off and the coach himself was 2-3 for Super Bowls.

When Jerry Jones took over ownership of the Cowboys in 1989, Landry’s glory days had faded. He was tossed out and replaced with Jimmy Johnson. He drafted amazing talent for the team, leading them to two back to back wins in 92 and 93.

Johnson is a controversial figure. He was rumored to have said that any coach in 500 could have won the Super Bowl with the talent the Cowboys staffed, a remark disparaging Jimmy Johnson. It was also rumored that Jones wanted Johnson gone, and that he was talking about replacing him with Barry Switzer from the University of Oklahoma. Jones is quoted as saying the next morning that the statement was “just the whiskey talking.”

In their prime, Jones had the Cowboys utilizing one of the largest payrolls in NFL history.

About the Author: Phin Upham is an investor at a family office/ hedgefund, where he focuses on special situation illiquid investing. Before this position, Phin Upham was working at Morgan Stanley in the Media and Telecom group. You may contact Phin on his Phin Upham website or Facebook page.